I spend way too much of my free time playing Salt - a game where you sail around a procedurally generated ocean, fending off pirates and hunting for treasure. A fairly recent addition to the game was cartography; you can add islands and features upon them to a map to stay oriented in the world. In the world, there exists a cartographer named Hachure, who will evaluate what you've mapped so far and reward you depending on how many islands you've mapped and how accurate your mappings are. So imagine my dismay when I had him evaluate my map for the first time and saw this: 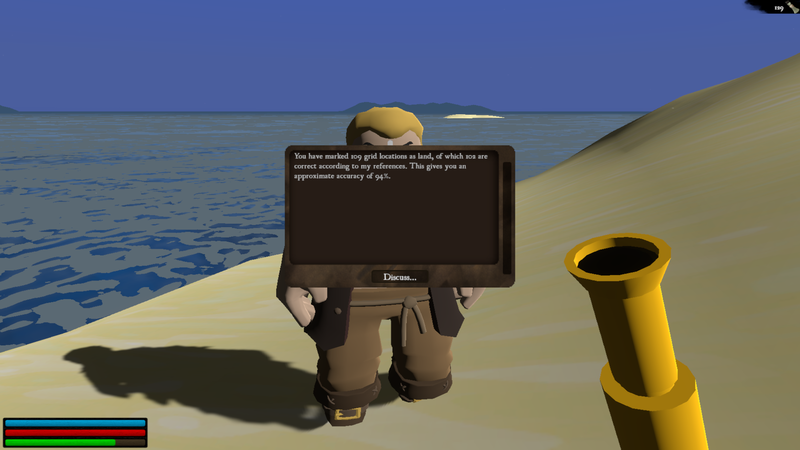 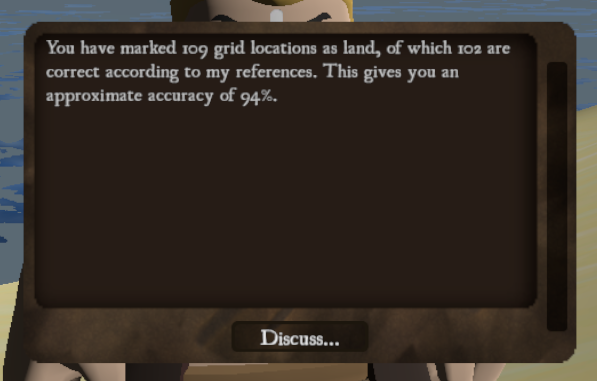 Unacceptable! I immediately felt a need to find the offending entries and remove them from my map!

Unfortunately, the test for a set of map entries takes a while; it takes a good minute or so for Salt to start and load my save. That means running through the above algorithm would take about 100 minutes. I don't have any qualms about code taking 100 minutes to find me an answer, but since it would be a human operator (ie. me) running these tests by clicking buttons, I want to lower the number of tests as much as possible. I don't even mind if this takes me more than 100 minutes to figure out - it'll be much more fun to stretch my brain!

Improving Upon the Naïve Algorithm

There's an easy improvement we can make to this algorithm. Instead of testing one entry at a time, we can test them in pairs. After going through 55 tests, if we found a pair with 2 bad entries, we know they're both bad; if we found one with 1 bad entry, we test one of the entries of the pair to see if it or its counterpart is the bad one. So, worst case scenario, 62 tests; a substantial improvement over the original 109!

It turns out we can do an even better job than 62 tests. If we were just looking for one, this would be simple; just take half of the entries and try those. If there's a bad entry, recurse on that half; otherwise, recurse on the other half. Since we're dividing the problem space in half at each test, this algorithm is O(log n), which means this would take about log₂(109) = 6.768184 ≅ 7 tests. Unfortunately, we have seven bad entries here, but maybe this can serve as some inspiration!

Even though we have more than one bad item, we can still apply the divide and conquer idea. If we find 0 bad items in a half, we can discard it; we can also discard the other half if we found that the half we're testing contains all the bad items. If we find bad items in both halves, we can recurse into both halves until we find a subset with a single bad item, and then apply the algorithm I mentioned in the previous paragraph to find it.

Is Probability the Answer? Probably.

Let's say we're looking at our first 55 items. What's the probability that those fifty-five items contains 0, 1, 2, 3, 4, 5, 6, or 7 bad items? I'm thankful that I took an introductory statistics course earlier this year, because the ideas presented in that course started to come back to me. It reminded of problems like "what's the probability of 5 out of 20 coin flips coming up heads?". However, this is a bit different; while a coin flip is not affected by previous flips, this is more like trying to determine how likely it is to draw a certain number of white balls from a collection of white and black ones - once you draw a white ball, the probability of drawing another goes down. Unfortunately, introductory statistics didn't prepare me for this - we only covered binomial (like coin flips), normal, and uniform distributions.

After some poking around on Wikipedia, I discovered what's called the Hypergeometric distribution. It's similar to the binomial distribution in that it involves tests with a binary outcome, but it differs in that it calculates probabilities without replacement. So, exactly what we need!

In R, you can use the dhyper function to calculate probabilities for a hypergeometric distribution. With that knowledge at hand, we can calculate the expected number of tests that running through this algorithm should take.

Let's consider the very first test in the program: testing a random subset of 55 entries. We can see the probabilities of the various outcomes of that test like so:

We can then recursively apply this logic to determine the expected number of tests we need to take for the subproblem each outcome represents, which would look something like this:

We can then multiply these with their probabilities and sum the result (adding 1 for the test we would do at this level) to get the expected number of tests:

Rounding up, we get 30 tests. Not bad! Here is an R script that performs the calcuation for expected tests, and here is a Perl 6 script that implements the algorithm by rearranging the map contents and prompting me for the cartographer's answer. When I actually ran it, it took me 27 tests to finish!

This was a fun little exercise in algorithm design, plus I got to spread my stats wings a bit. I love it when I can use my programming knowledge to improve things like gaming!