twitter github rss email
Looking for .git in all the wrong places Tracking Slowdowns in Creating Child Processes - Part One

Intermediate SQL: WHERE vs HAVING

Recently, at Work I gave an introductory SQL tutorial. Since the purpose of the tutorial was to teach SQL for the purpose of answering questions about groupings of data, the tutorial ultimately reached a discussion of WHERE versus HAVING. I thought I'd share the explanation I used in case others felt confused why SQL has two keywords that serve such a similar function.

If there's one thing you take away from this, it should be this rule of thumb:

I like to think of SQL engine as processing a query in phases: namely, an ON phase, a WHERE phase, and a HAVING phase. Understanding the first two phases is important when reasoning about WHERE and ON, which comes in handy when you're thinking about LEFT JOINs. The third phase, which involves HAVING, happens during GROUP BY. Here, WHERE answers questions about which rows will have grouping applied to them; at this point, we have no groupings against which to apply aggregate functions, so they don't make sense here. After that, GROUP BY is used to create groupings. HAVING then determines which groupings make it into the final result set by answering a question about each group of rows, which is why it only makes sense to use an aggregate function like COUNT or SUM with it.

Here's a diagram I clumsily scrawled on the whiteboard while preparing for the talk: 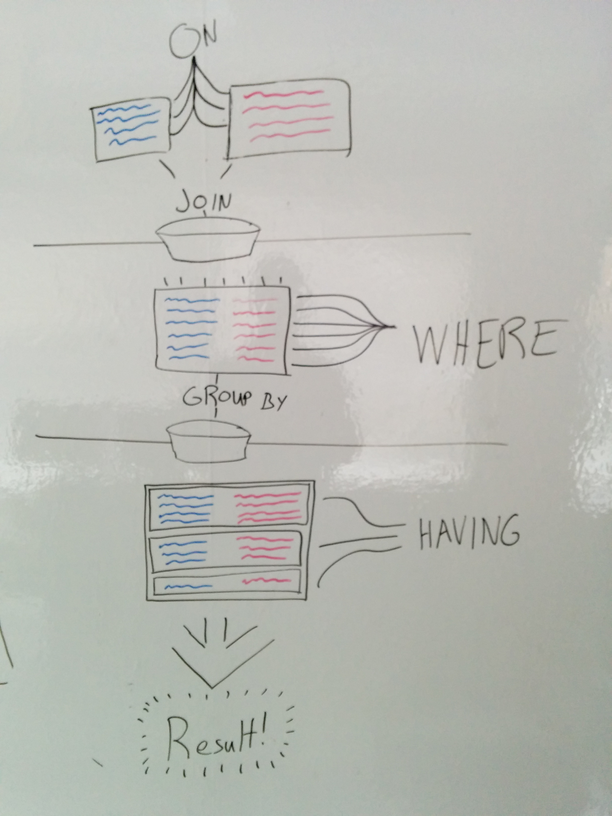 I hope this clears up the difference between WHERE and HAVING for some SQL beginners out there!