For the first language of the month article, the choice was clear: I wanted to learn more about statistics, so I enrolled myself into a course on Coursera to learn about it. It just so happens that the course is taught using R, so I get to kill two birds with one stone, as it were. I won't bore you with an exhaustive overview of the syntax, so let's just touch upon some of the features R provides.

doesn't append 1 to the vector consisting of numbers between 1 and 10; rather, it adds 1 to each element. This can seem a bit odd when you're not used to it, but once you get used to it, it makes so much sense. I feel like how I felt when I figured out how to properly use map in Perl. In fact, because vectorized code is so concise and (in the case of R) so optimized, you hardly see for loops in R at all.

that print expression is not run unless my_function refers to it, and then it is run only once. I made use of this when playing around with R to make a little function that just times how long an expression takes to run:

Let's say that we're not always big fans of R's lazy evaluation when it comes to function arguments. So let's make a function that we'll call eager to force a function to eagerly evaluate its arguments before running its body. Here's one way of implementing it:

Now, if apply eager to time_it, we'll find that time_it's functionality of timing a lazily evaluated expression has disappeared:

Since I'm just starting out with statistics and numerical analysis, I often feel like this when working on a problem: 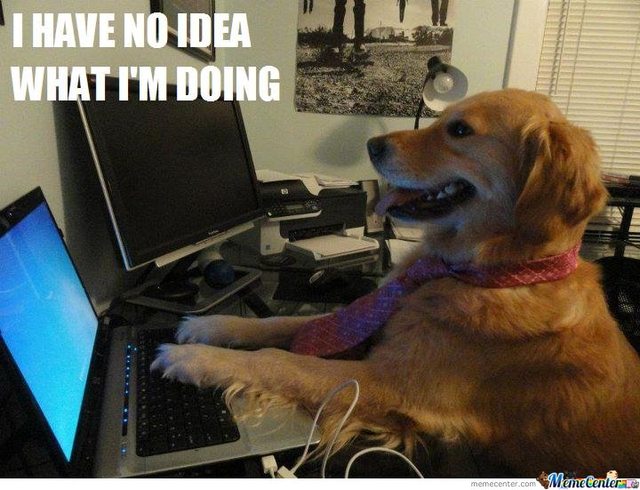 You'll see more details about this in a future post, but for my R project, I wanted to try using some advanced numerical analysis algorithms; I just had no clue how to implement them properly. Fortunately, R has CRAN, which is a place for people much smarter than I to put their implementations of these advanced algorithms for others to use.

R puts the R in REPL

I found R's REPL to be easy to use; it supports what most REPLs out there do, in addition to tab completion of existing functions and variables. One nice feature of R is that of images/workspaces; R allows you to save your current working environment to disk. One trick I used when working on my project was I would snapshot the environment every so often; if a failure occurred, I could simply load the image in the REPL and run the code that had given me an error so I could fix it. Since some parts of my program took fifteen or more minutes to run, you can imagine what a timesaver that was!

and the returned list is automatically destructured into $x and $y. A lot of languages support this, including Python, Ruby, and Octave. R doesn't, unfortunately, and I really wish it did, since it has a number of functions that return more than one value.

R provides a nice introduction to statistical concepts; if you want to apply them in other languages, there are things like PDL for Perl and numpy for Python. There are also other statisitical languages like Octave, Matlab, and Julia, if those are more your thing.

I said in my introductory Language of the Month post that I would talk about implementing a program using the language I was trying out, and I've been referring to a mysterious program that I wrote in R. For this post, I wanted to give the language the attention it deserves without overwhelming you, dear reader; next time I'll write about the program I wrote!